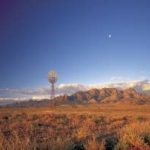 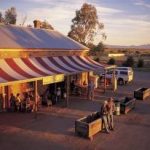 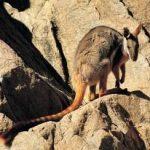 Pick up from your Adelaide CBD accommodation at approx 7.00 am and head north to the Clare Valley which is well renowned for its excellent wines, with time to visit the Seven Hill grounds. This is the oldest winery in the region established by the Jesuits in 1851.

We travel to Melrose, a lovely little town nestled in the foothills of the Flinders Ranges. Driving further north we arrive at Quorn for lunch which became the junction of the Sydney-Perth and Adelaide-Darwin railway systems in 1917.

After visiting Jeff Morgan’s Wilpena panorama, we arrive at Hawker late afternoon in time to see the sunset over the Flinders Ranges as kangaroos and wallabies come out to feed. Tonight, enjoy a relaxing meal, o/n en-suite accommodation Outback Chapmanton Hotel.

After breakfast we drive to Wilpena pound, framed by huge river red gums, optional flight available (at own cost), where you can see the mystical heart of the Flinders Ranges with stunning views over Wilpena Pound.

Continuing our journey, we explore Brachina and Bunyeroo Gorges, where we discover priceless geological treasures, crystal clear water holes and an abundance of flora and fauna including the rare yellow footed rock wallaby.

We will have lunch at the Prairie Hotel restaurant renowned for its innovative dishes, with Australian native and ‘Flinders Feral Food’ twists, and a focus on local and South Australian produce.

We then travel via Parachilna Gorge to Blinman, an old copper mining town nested deep in the Flinders Ranges, where we will do a guided tour of the town, including the old copper mine. O/n ensuite accommodation at the Blinman Hotel.

After breakfast, we head east via Angorichina and Wirrealpa stations, and then north passing Mount Chambers Gorge, one of the most spectacular and beautiful gorges of the Flinders Ranges and South Australia.

Both the Gorge and Mount Chambers, at 409 metres, were discovered by Captain Edward C. Frome and his party in 1843. They were first named by John McDougall Stuart in 1855 when surveying pastoral leases for the Chambers Brothers.

After a picnic lunch, we head into the plains arriving at the Balcanoona National Park head quarters. Balcanoona was established as a sheep property in 1857 and was worked until 1982 when it was incorporated in the national park. After visiting the woolsheds, we leave for our final destination today Arkaroola sanctuary. O/n Arkaroola ensuite accommodation.

Early breakfast before joining the exclusive half day Arkaroola ridge top tour, travelling in specially constructed open top 4WD vehicles, we will be taken on a guided tour of some of the most spectacular rugged country on earth. Trained tour guides will share their knowledge of Arkaroola’s 1600 million years geology, whilst taking us to the top of the Sillers Hill lookout with magnificent views of the desert country to the north.

After a relaxed lunch, we have plenty more time to visit some of the hidden treasures that Arkaroola has to offer. Shady river red gums and towering gorges guarantee a picturesque and relaxed bushland experience. Arkaroola waterhole gives us the best chance of seeing native birds and animals, including the elusive and endangered yellow-footed rock-wallaby.

Tonight, you may wish to tour the starry universe from one of Australia’s largest privately owned astronomical observatory (own cost). O/n Arkaroola ensuite accommodation.

This morning we head west, taking a different track taking in the inspiring scenery of the Gammon Ranges then the aboriginal communities of Iga Warta, where we will stop for morning tea and be welcomed by the Adnyamathana people with their collection of local artefacts.

Continuing onto Copley we have lunch at the bakery then south towards Leigh Creek.

We head towards Port Augusta situated on the quiet waterways at the head of Spencer gulf. watching the sun setting over the southern Flinders Ranges and arriving in Port Augusta late afternoon. O/n ensuite accommodation Sandpiper Hotel.

This morning we visit the Wadlata outback centre, a major tourism attraction and an accredited Visitor Information Centre for the City, the Flinders Ranges and Outback of South Australia.

We then drive to the Arid Lands Botanic Gardens. The Garden showcases a diverse collection of arid zone habitats in a picturesque setting of more than 250 hectares.

After lunch we head south and stop at Port Germein, once an important transport hub for the surrounding districts following the opening of its jetty in 1881 – at the time known as the longest jetty in the Southern Hemisphere (1680m, about 100,000 bags of wheat were loaded per year).

We arrive in Adelaide at around 6.30pm and drop you off at your hotel.